Please turn off your sarcasm meter because the following post will peg the needle.

After a cross country trip to attend my uncle's funeral my father and I were returning home via the fastest accessible means- an airline.  The trip there was uneventful, the family and the funeral were upbeat and I was just concerned with getting my 80 year old retired dad back home.  We made it as far as the gate for the first leg or our return trip.

No this is not about my dad "having the big one"- or even me for that matter.  It's about clothing.

Apparently my dad noticed something odd about a guy not answering his wife and he leaned over to me and said "I probably should have told you not to wear your duty shirt when we left the hotel." What are you talking about?  Cue man falling from chair to the floor and woman screaming. 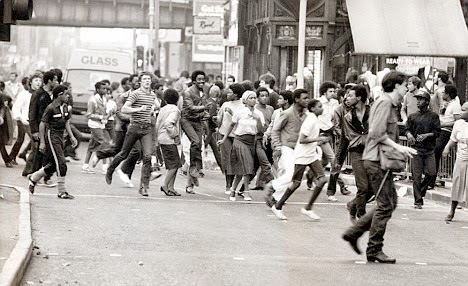 At the next instant the cattle at the gate appeared in wild stampede.  Not to help mind you but to get a better view of whatever was going on here.  And then the murmur started:  Hey, he's a fill in the blank EMT, fireman, paramedic, do-gooder, and the spotlight came on.

Needless to say my role playing, retired chief, father, gave me the aren't you going to do something look and I headed over.  He said later that he didn't have the "look at me I'm a fireman" shirt on so he felt no obligation...anyway at 80 if he did help we would have probably had two patients.  So begins a lesson in crowd dynamics.

You go get an AED!  You call 911.  Who else knows CPR?  Does he have a history, pacemaker, defib, yada yada yada.  At this point, as I am starting compressions I note that no one is doing anything.  Not talking, not moving, nothing.  Sir, would you please go get an AED?  Can someone move these chairs?  Cricket, cricket, cricket.  From herd of cattle to band of locusts.  Apparently this was the perfect storm of a group of people that had never heard of CPR or 911.  Great.

Soooo, I called 911 as I was doing compressions and began talking to the dispatcher.
What is your emergency?  I'm doing CPR.  I'm a fireman and need ALS here at gate 51 (how appropriate) quickly.
Please remain calm sir.  Is the person laying on the floor?  Look I'm not able to answer your questions right now I'm starting the second round of compressions.
"Antek, mówisz do tego idioty."  Which is what I said in a stern voice to my dad as he came over and picked up the phone and left.  We often talk in Polish when we need to make a point between the two of us.  It was simply "Tony, can you talk to this idiot?"

Finally an airport employee sauntered by and grabbed an AED.  It was the Three Stooges after that as she laid it down upside down, the shrieking AED box alarm screaming in the background and the crowd turning ugly with comments like if he was doing good CPR he would be alive now. Really?

A doctor jumped in to help but lost interest when he realized that there was no one to bill.  AED connected, analyzing, continue CPR.  Rats!  A police officer ran up and told everyone to get back.  Including me.  Ah, I'm doing CPR can I stay?  OK, but no one else.  Everyone get out of here!

So what seemed like an eternity, according to my smiling dad was just about four minutes and the cavalry arrived.  Paramedics, firemen, chiefs, more police, and several guys dressed in suits with behind the ear piece things.  At that point I gave my report and moved out of their way.

They were efficient, but if you know my track record you know that the poor guy never had a chance and the entourage left with the nervous wife in tow.

Epilogue:  My dad actually went to another gate told them what was happening and was probably the one that actually got things rolling.  He collared the cop and sent him over and directed the ALS crew to me.  Not bad for an old guy.  Then he he offered to buy me another shirt to wear but I declined.  Apparently I like the limelight.

Posted by Chicken Little at 1:30 PM