Not So Sweet Sound of Music 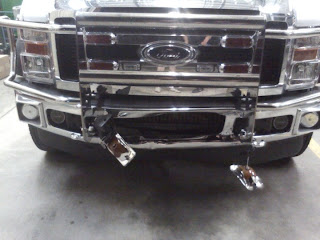 Doe, a deer a female deer
Ray, the medic on the call
Me, the name I call myself
FA, the start of what was said….
SO, what will my penance be?
LA, it was the newest in the fleet!
TI, it’s technically not my fault!
That will bring me back to
DOUGH we’ll spend to fix this thing!

With my apologies to Julie Andrews.

So the calls were diff breathing, round trip, unknown medical, CVA, diabetic emergency, chest pain...DEER!!!
Somehow the normal bitching about trip sheet paperwork pales in comparison to the detail required for an accident investigation. Ah well, who needs sleep? The good news is that no one was hurt, we were recalled from the scene, and as the officer I was only too happy to call the chief at "zero dark thirty" and update him on the above pictured results with his brand new less than 2500 miles on it ambulance.

Resuscitation was not attempted on the animal.

To be honest I didn't like where the fog lights were mounted anyway.
Posted by Chicken Little at 6:29 PM No comments:

Friday night is my thing.  I don't know why I have just always enjoyed doing things at the end of the traditional work week.  Recently it was no different.

Many of our firefighters enjoy taking our turn on the ambulance.  It is a real opportunity to get out and interact with the community, dust off a few skills, and just maybe help someone.  I ask for open shifts because the "we live for this" calls are really drying up for the fire only set.

So we are out tonight with an Explorer in our ambulance.  We allow young high school aged students with an interest in health care or EMS to ride along as an observer and maybe help with a few simple things in the back of the ambulance.  It's a great program and the kids get credit for community volunteer work that they need for graduation.  A win win if you will with the hope that they will continue their interest and get the training to replace me in the not too distant future.

We were in the day room listening to dispatch after dispatch all around us until finally the dispatch Gods hit us for an ALS call on the other side of the middle of no where.  We were headed deep into our fourth due area.  Get out the map books!  Luckily by the time we got there the ALS fly car had secured a recall by physician and we headed back out to a non-dirt road.

Then another dispatch a mile from us, covered by the returning  local area crew.  We were thinking about  a nice leisurely trip back involving ice cream.  Then just as they say, when you least expect it, expect it.

Rescue, Engine, Squad, covering ambulance (mine) multi-injury MVC.  Car into a bridge, with ejection and...we didn't hear the rest because we had our siren on and the Turbo begging for fuel.  We were past station five before the chief responded and arrived immediately after the police.

As we arrived on scene we saw a person on the road, and others in the car.  We split and I did Mass Casualty Assessments and prioritized the three patients.  It was at this point that I began to understand how lucky we were that this particular Explorer was with us.  He already had backboards out collars ready and was talking to the police officer holding traction on my patient.  By the time the rescue arrived we had the patient on a board and headed to our ambulance.  ALS arrived and we started preparing for the arrival of a medical helicopter.  Eventually a second medic and another ambulance showed up to complete treatment on the other two patients.  Both units provided transportation to trauma centers. 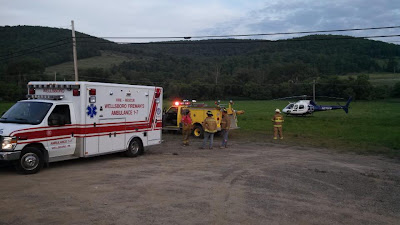 This is the way it's supposed to work folks.  Efficient, expedient, effective.  Thanks to a bunch of firefighters that "just did their job" and an extra pair of hands that provided us with the stuff we needed even before we needed it lives were saved.

We missed ice cream that night. We even got back after shift but we felt good doing good.  Those calls don't come around everyday but when they do we fall back on our training and the educated help of our brothers.  It's good to know that we can all rely on each other.  Thanks.


Posted by Chicken Little at 12:58 PM No comments: