OK, I'm over 300 in dog years and I get irritated pretty quickly these days.  But how would you know that?  Well, if I enter the restaurant that you chose for a nice quiet meal with your spouse, significant other, friend, or concubine you should pick up certain clues.  Like I am dressed up in my custom tailored Nomex suit of clothes made by Globe. I double parked out front and left the lights on, I wear a hat and am not Jewish.  A number of my coworkers come in with me and we don't wait for the Maitre D' to seat us.  We are all dressed the same, smell, and pretty much takeover when we arrive.
Now is a good time to pay attention.  I don't want to be here.  Someone took me away from my meal by making loud noises and implying that I had to get to this restaurant immediately, or sooner.  Someone else irritated me on my way here by ignoring my simple request to follow the law and pull to the right.  And a guy on a bike, that tried to pass me on the right when we were slowing down out front, claims that I purposefully opened my door just as he was getting to it so he would be knocked down.  By the way steel shank boots allow me to feel nothing as they crush bicycle spokes.
But yet all of that built up tension becomes just an afterthought as we walk toward the kitchen and are met with smoke and yellow flickering light emanating from the double doors.  I smile my Grinch-Like smile and speak in a loud voice "masks, utilities, open up, get-em the hell out of here.
This is how the kitchen looked as the cook and dishwasher ran out.  I'm not sure which one took the picture. 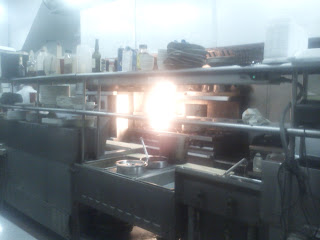 It wasn't too much larger than that when we arrived.
Yeah, we put it out in like five minutes.  It would have been three minutes but I heard with my less than Bionic hearing, the patrons arguing with the truck company about leaving their dinner.  As I re-entered the dining room it was what you would call a pivotal moment.  In my most officious voice I said "Sir, get out there's a fire."  No, I don't see any flames.  "Squad, grab the chair he can't walk."  These two huge hulks of men grabbed his chair, hoisted it to chest height and carried him out complaining all the way.  Yep, there goes my chance at the lead roll in the sequel to Captain America.  Everyone else in the place immediately scattered. Except for this quite beautiful young lady that was seated at the table with pain in the butt.
The new guy on the squad took off his glove and said "Miss, may I escort you to safety?"  She took his hand and left.  He'll probably get a medal for the rescue of a woman in a life threatening situation.  I know he got her phone number.
As we are picking up people are allowed to come back in for their things, and to finish their now lukewarm dinners.  Mostly we get thanks and a few pictures.  But Mr. Pain is still outside asking for my immediate arrest for a list of purported personal violations so lengthy that I can't really keep up with him.  I ask the cop if Mr. Pain would trade his single count of failing to follow the lawful order for the laundry list he has against me?  It's an open and shut case.
Anyway, he leaves alone, the young lady in the dress that has less fabric in it than my Nomex hood, catches another ride home giggling and melting all of our collective hearts.  And we head back to rewarmed something or other.  Yeah, maybe I can get through the rest of the day without too much crankiness.  Shoot, now I have to do the paperwork.
Posted by Chicken Little at 6:50 AM 1 comment:

In NY State near my cousin's home there was a rally against the state helmet law.  This sums it up for me:
The motorcyclist, 55-year-old Mr. X likely would have survived the accident if he'd been wearing a helmet, state troopers said.
Irony, Darwin, Karma, and other snarky comments just can't bring the guy back.  But a helmet would have avoided the problem.
Posted by Chicken Little at 9:39 AM No comments:

Sprinklers in Private Dwellings from Firegeezer.com

If You Can't Trust Your Homebuilder, Who Can You Trust?
ON AUGUST 19, 2010, THE MAINE Building Codes and Standards Board met in Augusta and heard public testimony on the proposed new building code that would require residential sprinklers in new single-family homes.  Excerpted from the minutes we read:

Mark Patterson, President of Maine Home Builders and Remodelers Association of Maine. (MHBRA). testifies: "MHBRA is not in favor of making sprinklers mandatory due to the costs which are estimated to be between $4,000 – $8,000."

The fire broke out at about 9 p.m. at the home of Mark Patterson, co-owner of PATCO Construction, a residential and commercial construction company based in Sanford.

FGNS photo
The nearest hydrant was a half mile away, so Cushing ordered tanker trucks to set up a water shuttle. The roof collapsed and the second floor collapsed into the first, he said.

The house had no sprinklers installed and was a total loss according to the Sanford Fire Department.
I don't just appropriate content from others but this was so good I had to get it on ASAP.
Posted by Chicken Little at 1:29 PM 1 comment: